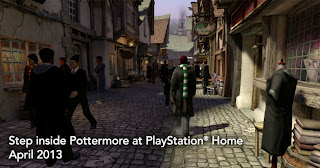 In recent days, Pottermore have begun releasing clues (both textual and audio) to upcoming Prisoner of Azkaban moments and below are just some of the clues:

Q1: Try our first Teaser Question: Who or what is about to get the axe?

Snitchseeker have also revealed that new chapters are to be released soon, "chapters 8-15 released next".

Finally, Pottermore have announced that there will be a very new way to experience Pottermore coming in April: When it joins Playstation Home! To find out just some of the things you will be able to do, check out the trailer below: