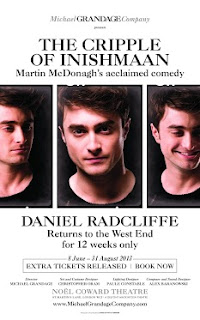 The first bits on news about Dan's next foray into Theatre have emerged as he returned to the UK (we assume to start preparing). A new poster for the play can now be viewed left courtesy of his very own google+.


He also did an interview with the Independent about his upcoming roles which includes Inishmaan:


"He walks that line between tragedy and comedy so brilliantly," Radcliffe said of [the playright] McDonagh.

"I think one of the hilarious things about this play is, by our standards today, how politically incorrect it is," said the actor, looking lean if a tad tired — he's been at the gym, working out ahead of rehearsals for the play — in the troupe's office atop a West End playhouse. "So much of the comedy is just people being relentlessly cruel to Billy.

"I'm trying to write something at the moment, and it's just so dark, and I think it's funny, but I'm not sure if anybody else ever would. I aspire to be a poor man's Martin McDonagh." 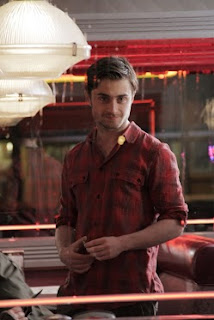 Finally, Dan has also posted somenew behind-the-scenes images from Horns, one of which can be seen right. The other and many other recent images can be found in our Dan Gallery.
Posted by Admin, Niamh, Danaholics Anonymous at 6:55 PM