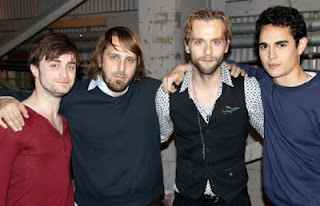 Dan posted a new images (left) of him with other Horns collaborators including Alex Aja, Joe Anderson and Max Minghella on Google+ as he confirmed that the film has wrapped.


The special 'Spotlight' event in his honor was held last night at the Whistler Festival in Canada, where he gave a Q&A. Mugglenet were in attendance and posted the following quotes:


Daniel Radcliffe attended the 12th annual Whistler Film Festival last night. Over the course of an hour Dan was interviewed by George Stroumboulopoulos, popular Canadian radio personality and talk show host, for Spotlight on Daniel Radcliffe.
Dan opened up about growing up in the spotlight, worrying that he would grow conceited but trusted in his parents and co-workers on the Potter films to keep him in check. He called the paparazzi "downright criminal" in their behaviour stating, "when else can five men chase a woman down an alley and that be okay" referring to how the paprazzo treated Emma after turning 18.
Radcliffe opened up more about directing and producing, saying that he would like to get behind the camera but thought the only chance he'd have to direct is if he wrote the script himself. About the short comings of trying to define a movie, he said "the harder a film is to define the better it probably is".
Dan told us a great story about how he got his job with Extras, almost 8 years ago, saying "it was the weirdest way he's ever gotten a job, the first job he's ever said yes to without reading a script". According to him while in Australia filming December Boys he was watching a snake slither around a table, bottle feeding an orphaned kangaroo, when his dad ran into the room with Ricky Gervais on the phone asking him to be on the popular British sitcom.

A full report is ongoing and we are also keeping an eye for pictures, videos etc from the Whistler Festival themselves. 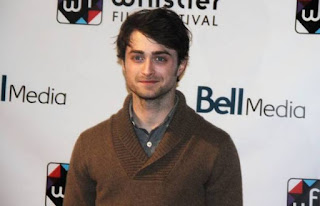 UPDATE: (LIKE FIVE MINUTES LATER)
The Vancouver Sun have posted a nice image of Dan at the event and a summary.

Dan on The Woman in Black being make'r'break for his career:


"But yeah, if that film had done nothing, I would have been devastated, and really concerned. . . . So I was very pleased when that film did well. But I have to say, I did also smile a small smile when I heard that it was the most complained-about film ever, to the censorship commission. I did go around the whole way saying, 'if you have kids under 12, don't take them.' It is really a scary movie."


On Kill Your Darlings:


It's fun. The script is not reverent. It doesn't hold these men up as the venerable greats of American literature. It shows them as the kind of drug-addled miscreants that they were in the 1940s when they first met. It's not just going to be just a dry, historical recounting of events . . . I hope it's going to be a very beautiful, very sad story about love, and what it means to be an artist.


Joking about getting great news in the same way repeatedly:


Yeah, that's the story of my life, basically - my dad running into the room to give me great news.


Read the full article over at the Vancouver Sun.More images will be in our gallery once i work out how to work theirs :P.
Posted by Admin, Niamh, Danaholics Anonymous at 7:29 PM