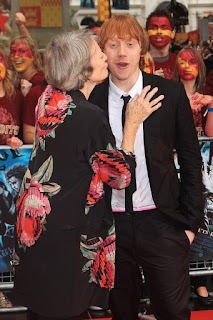 Award season is very much in the air as Maggie Smith gets nominated for many awards with her current job, Downton Abbey.
Among the list of awards are:
Good luck Maggie!!!

Harry Potter, as we previously let you know via twitter, has been nominated (in a way) for People's Choice this year as Potterheads as a fandom is a nominee as is Emma Watson for her movie Perks. Voting is closed since 11.59pm EST yesterday however do keep your fingers crossed for us all and Emma!

Harry Potter is also nominated for a series award at the upcoming Critics Choice Awards. The award ceremony will be held in January and the category, film franchise, can be voted on here.
Source: Snitchseeker

Finally, in FABULOUS news, Emma Watson has won Best Supporting Actress at the 2012 San Diego Film Critics Society awards for her part in Perks of Being A Wallflower!
Congrats Emma!
Posted by Admin, Niamh, Danaholics Anonymous at 8:33 PM