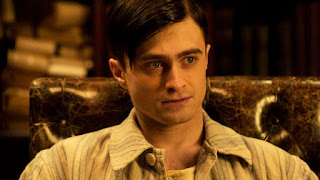 Sky Arts have release new promos from the first episode of Daniel's upcoming comedy series, A Young Doctors Notebook. One such image is now left while the rest can be found in the gallery. Snitchseeker have posted these and some adverts the channel has run so far with the following information:

In the first episode of the four-part comedy drama A Young Doctor’s Notebook, we encounter the doctor (Jon Hamm) recollecting his younger days when, at the fragile age of 25, he was hurled pitilessly into the icy depths of rural Russia. With his old notebook acting as his memory-catalyst, the now-experienced doctor travels back in time to the eve of the 1917 Russian revolution, but perhaps he is not entirely prepared for what he will find.

As he looks back and revisits himself in embarrassment, awe and a hint of nostalgia, his inner conflicts are unravelled, brutally and comically, whilst he battles to rediscover his past, and his happiness.

Meanwhile, Jon Hamm’s younger self is played by an outstandingly witty Daniel Radcliffe, who arrives at the Muryovo village soon after graduating - top-class, as it must be noted - looking like the inexperienced, scrawny boy he was. Beardless and almost pathetic, he finds himself in the midst of panic, having to cope with the grotesque conditions of an antiquated, regressive Russia, back then a stranger to electricity and such modern luxuries as fashioned by Western Europe.

His first test is a woman suffering from the extreme pains of giving birth, but this may have been one medical lesson that the doctor wasn’t particularly attentive to. Shocked and terrified to his very core, he dashes to his library, frantically searching for an answer but only to be faced with a very angry, older version of himself, namely Jon Hamm, who pushes him to act like a man.

Brusquely humorous and delightfully exuberant, the series inauguration is bound to compel you and leave you wanting more.

One video is below:

You can pre-order A Young Doctors Notebook on DVD at Amazon.


In other Dan news, Daniel is to appear at the Canadian Whistler Film Festival, according to the Vancouver Sun:

The actor's portfolio will be spotlighted on Nov 30 as the Whistler Film Festival celebrates its 12th season.

Read more: http://www.vancouversun.com/news/Daniel+Radcliffe+Rashida+Jones+appear+Whistler+Film+Festival/7562847/story.html#ixzz2CbGOsfGX
The actor’s portfolio will be spotlighted on Nov. 30 as the Whistler Film Festival celebrates its 12th season.

Read more: http://www.vancouversun.com/news/Daniel+Radcliffe+Rashida+Jones+appear+Whistler+Film+Festival/7562847/story.html#ixzz2CbGOsfGX
The actor’s portfolio will be spotlighted on Nov. 30 as the Whistler Film Festival celebrates its 12th season.