DR.COM are reporting that Canadian publication The Province have given us a little look onset of Daniel Radcliffe's upcoming chiller Horns which he's currently filming in Vancouver. The article featured a new image of Dan with horns in tow filming in a graveyard. This can now be seen here. Below are some quotes from that interview:

“Prosthetics are amazing these days, this is like a transfer tattoo — they just peel the backing off and it sticks,” the 23-year-old actor said.
There’s a bit of touching up involved as well. Radcliffe is in the make-up chair for 45 minutes each day as the effect is created, and up close it looks uncanny, the goat-like horns seeming to rip through the skin of his forehead."

Of the film Dan said:

“It’s a metamorphosis story, but the thing that excited me was that tonally it wasn’t like anything I had read,” he says.
“It was both incredibly dark — like really dark and violent, and full of classic horror stuff — but also it has a very dry sense of humour.”

A video is also included,where the interviewer speaks of the experience of interviewing Dan, Daniel Radcliffe keeps moving on from Harry Potter beginnings (with video).

DR.COM also posted the image TOP left, which is a new promo of Dan playing Wallace, an awkward guy put in the friend-zone by Zoe Kazan's character in the F Word.  Snitchseeker posted additional set images and we took some screencaps from the website montage which will be in our galleries from here. Just click right twice. 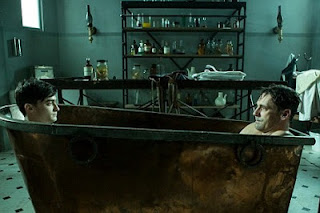 A new  promo and poster have also been released from The Young Doctor's Notebook which will begin airing on Sky Arts on 6th of December.
The former awkward moment for the actor can be seen right whereas the poster will be in the gallery.
An article accompanied the image which can be read at The Metro website.

Finally, DR.co.uk revealed that Daniel was to guest talk on TCM's series "Great Expectations: Novel to Film". Dan has begun his stint with Brighton Rock: