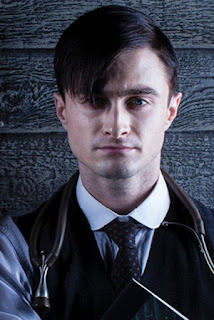 Firstly, the first promotional image has been released from Daniel's upcoming Sky Arts mini-series A Young Doctor's Notebook, according to Snitchseeker. The image, released by Sky can be seen left. The leading fansite also released the full audio of the press conference Daniel attended last week to officially announce the date of December 6th as the starting point for the series which also stars John Hamm as an older version of Dan's character.
The audio can be listened to through the video below:

DR.CO.UK were first to report that Entertainment Weekly had posted the first promotional image of Daniel in upcoming thriller Horns (below right). Dan has just recently flown back to Toronto to film the horror-like flick: 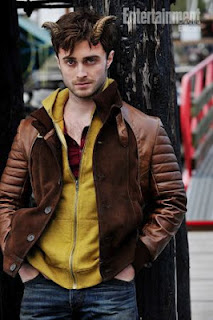 Radcliffe describes his new role [in Horns] as “deeply emotional and also incredibly outrageous in some ways.” How outrageous? Well, let’s just say the 11-year-old Daniel Radcliffe we met in Harry Potter is nowhere to be found. In his place, we have Ig, who is accused of the violent rape and murder of his girlfriend before waking up and to find horns that come with a wildly tempting power trip — he can induce people to tell the truth or compel them to give into their ugliest inner urges. Says Radcliffe, “To play somebody who, in the midst of a time in his life of great turmoil anyway, undergoes this horrific transformation into a devil character — it was very, very exciting.”