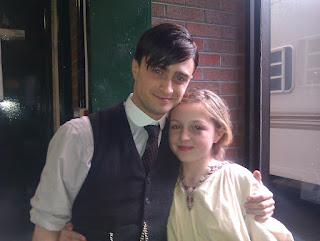 The first image from the set of Sky One show 'A Young Doctor's Notebook' emerged Saturday Last on the IMDB page for Dan's co-star in the show Rhianna Hosmer as she is in the picture with Dan. The picture can now be seen left as posted by DR.COM.
The Sky Arts show will air in early 2013.

In other Dan future projects, he has signed on for two very diverse films and a tv show cameo.
Variety confirmed that Dan was set to star in supernatural thriller Horns which is summarized as follows;

Radcliffe will play Ig Perrish, the lead suspect in the violent rape and killing of his girlfriend. Hung over from a night of hard drinking, Ig awakens one morning to find horns starting to grow from his head. Their power drives people to confess sins and give in to selfish impulses -- an effective tool in his quest to discover the circumstances of his girlfriend's death and for exacting revenge.

He is also set to star in a genre we have all been waiting for from him, comedy.
Firstly he is lined up to play a romantic lead in rom-com The F Word about the dreaded 'Friend-zone'.
He begins shooting opposite Zoe August 15th in Toronto and the film "is based on the play "Toothpaste and Cigars" by T.J. Dawe and Michael Rinaldi."

Finally, Daniel is to guest-voice in the popular parody comedy series it was revealed at Comic-Con.
Source: Snitchseeker.
Posted by Admin, Niamh, Danaholics Anonymous at 6:39 PM