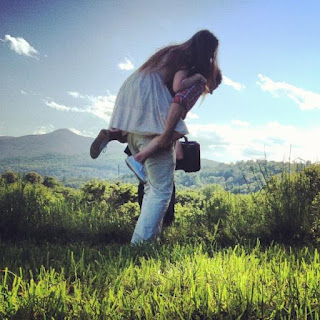 Bonnie has been over in New England filming Shakespeare's Daughter and has now finished and returned to London. She tweeted;

Made my flight by the skin of my teeth. Goodbye New England you have been wonderful hello London!!!

Her co-star Nancy Hemingway has tweeted some photos. The one left is of Bonnie avoiding poison ivy, the other, which is lovely can be viewed here.

More to come as soon as we have it!

Rupert's most recent project,The Necessary Death of Charlie Countryman has also wrapped according to @thecampaignbookcom but RG.US have said there is no word on when he'll start filmimng CBGB, though they posted an article from Huffington Post.
Posted by Admin, Niamh, Danaholics Anonymous at 2:49 PM