Dan has been busy promoting The Woman in Black DVD release over the past few weeks, most recently sitting down with Yahoo UK and Ireland. Mugglenet have reported that Dan has revealed the secret to a great on-screen kiss and we reckon he's wrong...that he's what makes it:

"God knows. I don't know [blushes]. You just kiss like a normal person and enjoy it! You just have to enjoy it and really be into it with the person you're with. I've never had to kiss anyone that I didn't really like. I don't know how I'd feel about that. But yeah I think as long as you're enjoying it that will show. You gotta have fun, you can't be all nervous and twitchy about it."

He also discusses his newest role, in the Young Doctor's Notebook, fan wars and the MTV Movie Awards in which he is nominated for two awards; Best Actor and Best Hero.
Check out the video here or below:


DR.CO.UK are reporting that a new Dan interview appeared in the Advocate, where he spoke about Kill Your Darlings and Trevor Project:

You portray Allen Ginsberg in your next film, Kill Your Darlings. Radcliffe: I feel I am incredibly lucky to be playing him. Despite the damage from his upbringing and his mother and what he went through, he really emerged into the most fully formed open, compassionate human being out of all of the Beats. He’s certainly the one you’d be most comfortable spending time around, I think. When you watch footage of him and William Burroughs together and see how much they care about each other and how close they were and the love between all those guys and the incredible sadness that brought them all together that they were all carrying in some degree. It’s great.

Last year you received the Trevor Project’s Hero Award. The founder of Trevor Project said that you actually reached out to them to become involved with the organization. Why was this important to you?
Radcliffe: I think it started when I was doing an interview a few years ago and I was being asked about gay rights and I realized I was speaking much more passionately about gay rights than anything else I’d been asked about. It’s because while growing up a lot of my mum and dad’s best friends were gay, so there were always a lot of gay men in my life.

When I went to school, suddenly there was something weird about that for a lot of kids. That’s still very odd to me. I’m still like, What’s new about it? It’s been going on for ages. I couldn’t understand why people are freaked out about it. I find it incredibly frustrating that people are still being brought up in ways that encourage homophobia and allow it to affect the lives of millions of people across the country and the world. Finding out about Trevor Project through friends at that time just seemed perfect.

I wanted to be of service and help, and I’m just incredibly proud that I’m able to. I do get people coming up to me and saying – I’d say at least five or six times each week someone will come up to me and say, "Thank you for what you do for the Trevor Project." It’s amazing that you’re able to effect a positive change just by being you and talking about things that you feel strongly about. I’m just very proud to be a part of it.

Check out the full interview here. 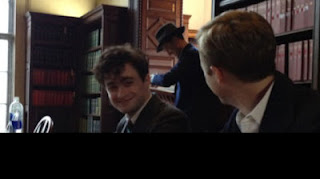 Snitchseeker have posted about some behind-the-scenes Kill Your Darlings photos released by cinematographer on the film Reed Morano ,one of which is left.

Many more interviews were done for America,Canada and Australia media with Dan, co-inciding with The Woman in Black dvd release in America and the UK, and the film's release in cinemas in Australia.
Dan Radcliffe.co.uk posted the audio from the Kyle and Jackie O radio show in Australia.
Listen below:


Dan also did a twitter Q&A with fans to promote the dvd release in the UK. Check out the full transcript at DR.COM here.
Posted by Admin, Niamh, Danaholics Anonymous at 7:06 PM