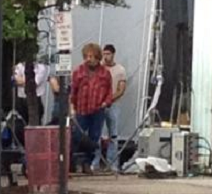 Alan Rickman was to be seen donning a Ginger Afro wig in Savannah, USA today for his role in CBGB. Fans posted images all over twitter of the set, with @ForestJim posting the one left of Alan.
Read a nice article RG.US linked to here.


In other cast projects, Emma Watson has confirmed on her twitter that she will indeed be starring in the biblical biopic:

She has been retweeting her co-star Russell Crowe who has said on the script:

@russellcrowe
no sails, no engine, runs purely on faith...does it bug anyone else that Noah's sons are named in the bible...but not his wife...#re-write.

Finally, @Wastelandmovie have posted a new image of Matthew Lewis and his Wasteland co-stars,which can be seen here.Here's what they said of the films post-production progress:

Just seen the first cut of 'Wasteland' what can I see WOWOWOW.

At the event the Leeds Rhinos players will dance along with the Rhinos dancers to help raise money for Rob Burrow’s Testimonial. The event will be held on July 7th at The Queen’s Hotel in Leeds.

The event will start at 7pm and is £55 per ticket which includes a three course meal and fantastic entertainment! To book your tickets you can either contact 0871 423 1315 (calls are charged at 10p per minute – calls from mobile may vary) or book online by clicking here.

There are also a limited number of VIP tables of 10 available next to the dance floor for only £750 .If you wish to book a VIP table you will need to e-mail sian.jones@leedsrugby.com.

MatthewLewisCom have also reported on an event Matt attended MAy 31st last, the Audi Polo Challenge,which can be read here.
Posted by Admin, Niamh, Danaholics Anonymous at 9:41 PM