Sneak Peek at WB Studio Tour with One Show, Tom Felton at Convention and Film Premiere

WB Studio Tour and Warwick Davis had been tweeting all day about Warwick's visit to the Leavesden Harry Potter Studio Tour (Butterbeer, anyone?) and thus the clip that would be shown on BBC1's the One Show.
Hey You Guys posted the video and it can now be seen below!

To watch more, visit tag
Can't wait to visit on March 31st and live-tweet you all! Who's also visiting on Opening Day? 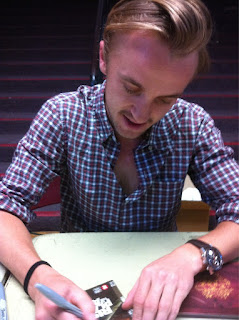 In other fan event news, of sorts, Tom Felton started his usual 'Nerd Fan Convention' run in Los Angeles with the Comic Book and Science Fiction Convention and feltbeats were there in force to cover the event. All their thoughts, pictures and videos can be found here. Left is one nice picture of Tom signing for fans. He also attended the premiere of Salmon Fishing in the Yemen which he tweeted admirably about. You can see some pictures here.
Posted by Admin, Niamh, Danaholics Anonymous at 7:54 PM