Potter wins at Empire Awards-Matt,Bonnie,Evanna in Attendance; pictures and videos 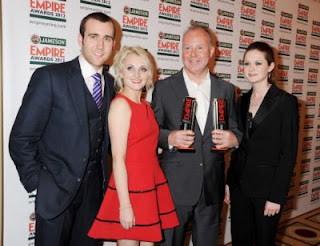 on the 25th of this month we were very excited to retweet Multitude Media and Empire Magazine when they tweeted that;

@empiremagazine Congratulations to David Yates for winning the Best Director award for Harry Potter And The Deathly Hallows: Part 2!

Since then, MatthewLewisCom, Snitchseeker and co have updated to include images and videos from the night including interviews with the lovely Matthew Lewis (who you can see tonight in his first post-potter role, BBC1 9pm).

MatthewLewis.com were first to post a number of images of Matt and co (Bonnie,Evanna and David Yates) on the night,which cna be seen in their gallery (along with the top left image)here.

Finally, Snitchseeker posted the video of the acceptance of the BEST FILM award. This can now be seen below;

The video of David Yates' Best Director win can be seen here.
Posted by Admin, Niamh, Danaholics Anonymous at 7:28 PM