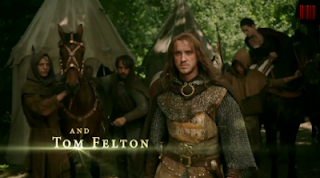 What seems an age ago now, it was announced that Tom Felton was to star in the SKY ONE miniseries adaption of Kate Mosse's beloved novel Labyrinth playing government official Trencavel.
Now there is a trailer and Feltbeats have released it to us!
BUT WAIT...It's no longer valid :( And everywhere has the same link too..
We will try to find another, in the meantime, left is noe screencap from it!

Feltbeats have also announced that Tom is to appear at the Chicago ComicCon which will take place "Thu, Aug 9 2012, 12:00p.m. – Sun, Aug 12 2012, 5:00p.m. at Donald E. Stephens Convention Center (Rosemont)Rosemont, IL" and you can buy the VIP TOM PACK here or an ordinary day ticket (without autograph) here.
Posted by Admin, Niamh, Danaholics Anonymous at 11:55 AM