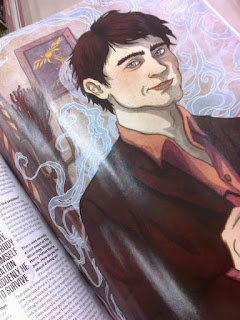 RupertGrint.net made a post last night reporting no a few interviews with the man himself that are begining to surface, including this Mtv ONE in which he reacts to the 'oh no she didnt almost kill Ron' news;

For the other snippets,check the link above.

In other cast interview news, Mugglenet picked up on this interview with Alan Rickman in which he talks at length about Snape.

"What I knew was he was a human being and not an automation and I knew there was some sense of protection for Harry or I worked that out. It was enough to know, I didn't know he was a double agent."

Finally, SCIFI NOW have announced on the cover of their latest issue that Daniel has given them his FIRST INTERVIEW about the Woman in Black. The picture left of this post was the one included with the one page article in which Dan talks about Arthur Kipps and how he is "less of a hero than Harry".
I will attempt to find a online version and update asap.
The Woman in Black US Twitter have also posted on About.com 's preview of the movie. Check it out here.
Posted by Admin, Niamh, Danaholics Anonymous at 9:01 PM