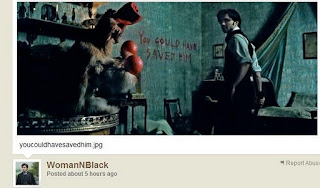 WOMANNBLACK ,the US twitter posted this cool new picture from The Woman in Black on their OWL account, to the top is a screencap.

In other new images, Emma Watson has previously been promoting Lancome's Rouge Lipstick in China and Snitchseeker have revealed the very first promo images,which can be seen in our cast album. Keep in mind these are artistic rendering images and are not actual photos as of yet. Keep you posted!

IN AWARDS NEWS, Mugglenet are reporting that the pursuit of nods is STILL going badly (that has been their take in recent days) as The Screen Actors Guild Awards have barely mentioned Potter.

"So what awards are the cast and crew of Harry Potter nominated for? Here is the "short list":

Outstanding Performance by a Stunt Ensemble in a Motion Picture

Is it time to break out Team America for their SAG mockery? PERHAPS SO!! Although the homophobic undertones arent to be appreciated...not suggesting that at all!
Posted by Admin, Niamh, Danaholics Anonymous at 11:11 PM