Firstly we have the first of a set of great little videos from independent Dan site, Daniel J Radcliffe Holland, in which Dan addresses via video the JEC Journalistic Convention 19th november last;

The rest can be found at ughughmoodog's Channel, if you scroll down the right column.

Secondly we have the much anticipated footage (for those of us outside The US ) Of Daniel and the rest of the How TO Succeed cast performing in the Macy's Thanksgiving Parade,sourced at Snitchseeker;

Finally, Dan sat down with MTV to talk giving thanks and Mugglenet have reported that in the interview, he spoke of an ambition to direct; 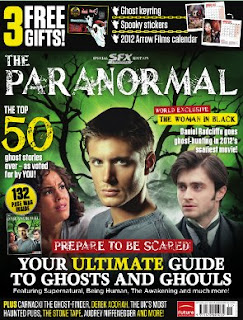 Left is SFX Special Edition: The Paranormal, which will include a sneak peek of the woman in black.
Posted by Admin, Niamh, Danaholics Anonymous at 3:34 PM