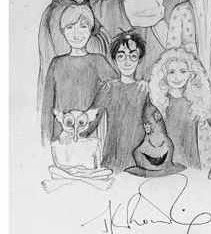 Today,March 1st, is Ronald Billius Weasley’s 31st birthday and we have been tweeting all day about it! At midnight I sent the first tweet wishing him a happy biryhday,the second followed about 20 mins later and was about how much i love him,and since around noon I have been tweeting RANDOM RON FACTS every so often with #HappyBirthdayRon at the end! Don’t forget to RT! Maybe I’m getting a little overexcited, but Ron has been my favourite character and I got quite upset when i stupidly believed the boggart in Order of the Phoenix! Ron,to me,is the most realised and human in the books and I see parts of him in my 15month relationship redheaded boyfriend all the time,which makes me happy.

So many happy returns to the man who now has a family of him own with his one true love and the ultimate shipper partner, Hermione!

I would have added the drawing I had a guy do for me at our uni’s con, but the ginger of my life still has it...and it looks more like Bill (didn’t tell the guy that).
P.S SOME INTERESTING THINGS I FOUND WHILE LOOKING FOR AN ADEQUATE ILLUSTRATION
http://www.goodreads.com/characters/28270-ron-weasley
http://www.accio-quote.org/themes/ron.htm
http://en.wikipedia.org/wiki/Ron_Weasley (INTERESTING THEY DIDNT HAVE THE WEASLEY FAMILY TREE DRAWN BY JO)
http://www.angelfire.com/mi3/cookarama/rowldrawings.html (DAMN PICS WONT SHOW UP)
Posted by Admin, Niamh, Danaholics Anonymous at 4:39 PM