Rehearsals have started for How to Succeed,so Good luck DAN! 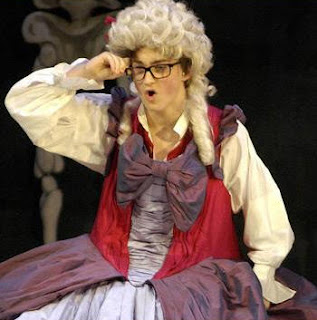 Having appeared in 3 productions previously (Equus both on the West End and Broadway and Play What I Wrote) Dan should be fine.
According to the fabulous DanJRadcliffeNL , the official Facebook of How to Suceed in Buisness Without Even Trying has announced the start of rehearsals, so I thought I'd run down Dan's history on stage in pictures!
Starting with his earliest appearance, Dan appeared in Play What I Wrote, directed by Chamber of Secrets and Shakespeare pro Kenneth Brannagh. Dan only appeared briefly, but it showed his comic side.
-http://www.culturewars.org.uk/2002-02/playwrote.htm 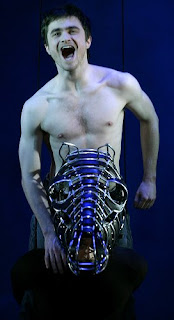 His first real entry into Theatre was in his WEST END DEBUT of Equus, the classic psychological Peter Shaffer play. I attended on the opening night, and Theatre is really where Dan shines. Such disipline and grace, such talent and believability.

Dispalying just how wonderful Dan was, and the success of the play, it later moved to Broadway with the same cast, or at least Dan and Richard Griffiths stayed on.

Now as he moves onto his next Broadway play, returning to comedy, everyone fans and civilians alike, are prepared for quite a show, and quite a performance from the lead. His Equus style comedy act for an A.I.D.S charity during his Equus Broadway run show his comic genius to those who missed Extras...
"You were built for racing,
But I prefer you Facing,
Forward, when I'm on you, and we ride!
.... and so on..