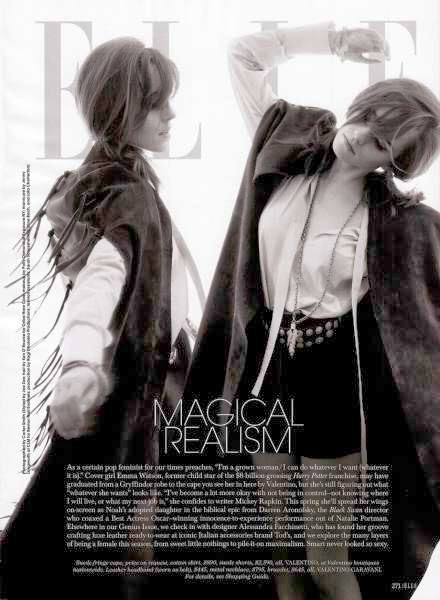 We recently told you about Emma's upcoming coverphoto and interview in Elle Magazine's April edition. Now we have a few more images for you, scanned from the magazine. Check out one left and the rest in our full Elle-spread-so-far gallery here.

In other, less recent, Emma stuff, a video has been released from her Wonderland photoshoot. We reported previously that Emma guest edited the mag and interviewed many people, among them her Noah director Darren Aronofsky and she spoke about  Queen of the Tearling during an interview and photoshoot.

The behind-the-scenes video is now below:


In the issue, she first spoke about her upcoming role in the Queen of the Tearling:
Wonderland: Emma, tell me about The Queen of the Tearling. When did you first read Erika Johansen’s novel?
Emma: David Heyman sent it to me last summer. I had kind of said I would never do a franchise again, so I was desperate to hate it. Unfortunately, I didn’t sleep for about a week because I couldn’t put the bloody thing down. It would be fair to say I became obsessed with the role and the book. Now I am executive producing it. Ha!