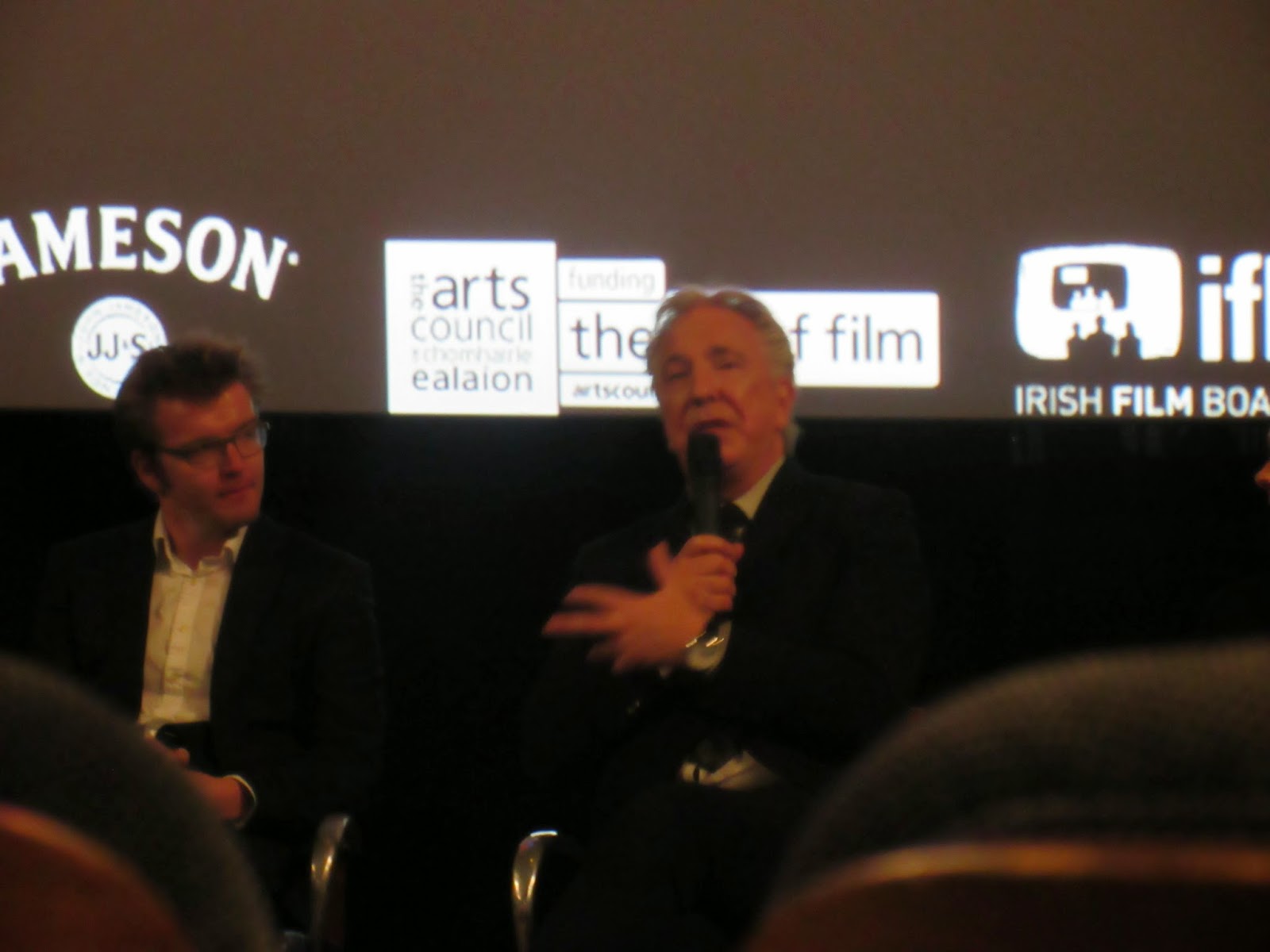 I attended another great event at the Jameson Dublin International Film Festival yesterday. The Irish premiere of Alan Rickman's A Little Chaos occured at Cineworld Dublin and Alan Rickman and a few of the cast/production team were on hand to answer questions. Alan introduced the film humouring the audience with the fact that the film was neither historically accurate of biographical but telling about the long time it took to get to the screen and the power of the original text by Irish native Alison Deegan.
The panel took place after the screening which took questions from a professional interviewer and a few from the audience. It consisted of the writer Alison Deegan, director Alan Rickman, co-star and Red Rock femme fatale Cathy Belton, costume designer Joan Bergin and composer Peter Gregson.
Questions included:
To costume designer Joan Bergin: How did you go about creating a garment for a working girl in the 17th Century when there was no frame of reference for such a thing as women did not work?
Joan Bergin cited the types of styles and also that the outfits had to be practical to working in a garden.
To fellow actress Cathy Belton: Was the role of the handmaid you play to help us get to know Kate Winslet's character?
To writer Alison Deegan: What was the inspiration for this piece?
*****spoiler*****
The writer mentioned the case of a hit-and-run of a friend's son as the starting point.
****spoiler******
To composer Peter Gregson: How did you blend the modern and 17th century in your work?
To Alan: How was is like playing the Long Fellow (Eamon DeValera) in Michael Collins?
Rickman says, as with playing any real life person, not to be judgemental is key, even if the director has already decided.
To Alan: How was Kate Winslet to work with this time compared to over a decade ago in Sense and Sensibility?
Alan compliments Kate's hard work and fun attitude.
To Alan: What was it about this script that kept you going through the length it took to get to screen?
the director complimented the writing as being the key reason he worked so long and hard to get it to screen.
Videos of the questions for Alan will soon be up on our Youtube. There is already some images in our gallery on Facebook.


Review:
A Little Chaos is an exquisite example of the period drama beautifully shot in the UK with some talented Irish people on board. The story may have a fair bit of historical inaccuracies but the feel and the grandeur of the time in well presented via fantastic set design and  corseted costumes.
This is a touching story of Sabine who becomes a landscape designer to support herself after the death of her husband which we later find out died tragically. Winslet plays it with dignity and believability amd truly leads this film. Rickman offers both decadence and comic relief to this film in his portrayal of the King who needs perfection. There is a particularly good scene between Winslet and Rickman where Sabine mistakes the king for his gardener. It gives the king a more human feel and Sabine's ignorance about court and her inherent kindness is displayed with affection.
Fantastic support  comes from another deatheater alumni, Helen McCrory who adds a villain of sorts to the piece. Another support actor that is unforgettable is Stanley Tucci who plays a diva-esque Marquis.
Overall this is a story, despite it's inaccuracy, that draws you in and the majority of the characters are rounded just enough to have your liking or disliking.
*****


A Little Chaos is in UK/Irish cinemas on the 17th of April and US cinemas 8th May. Please see IMDB for a full list of countries that have release dates so far.
Posted by Admin, Niamh, Danaholics Anonymous at 4:08 PM