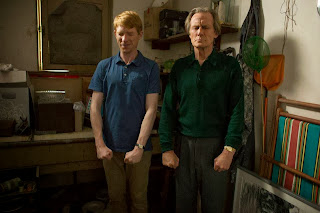 Last night I had the priviledge of attending an advance screening of Bill Weasley actor Domhnall Gleeson's first forray into Hollywood, About Time. Having had bit parts in big films including Harry Potter, Dredd, Never Let Me Go and Anna Karenina it was indeed about time he made his place and great talent felt in real way for an international market. His best roles so far, in Sensation and in charity sketch once-off Immmaturity for Charity had been mostly seen by an indie or Irish audience and this was a shame.

Therefore when Domhnall claimed the male lead in rom-com About Time alongside comedy and romance veteran Rachel McAdams and behind Richard Curtis' genius script-writing (his previous etchings include Love, Actually and Notting Hill as well as adaptive screenplays for Bridget Jones Diary), we knew he was on to a winner. And a winner it is. It is a cute, heartwarming, emotional and inspirational tale of love, life and how even time travel cannot change the beauty and pain of life.

Domhnall beautifully portrays kind and awkward Tim who struggles to get ahead in the game of love despite his cute face and high ranking job. Gleeson garners great performace support from Bill Nighy who plays his witty and charming dad as well as a cameo from the late, great, Richard Griffiths.

Even Emma Watson gave the film a solid thumbs-up who attended a screening on the same night! Here is what she tweeted:

I had IMPOSSIBLY high expectations for @AboutTimeUK (being a Richard Curtis maniac) - but it was one of the best films I've seen this year.

And indeed it is. It is up there with This is the End with me,for sure.
Posted by Admin, Niamh, Danaholics Anonymous at 4:35 PM