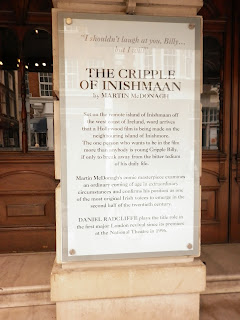 On June 8th last, Daniel Radcliffe had his first performance of The Cripple of Inishmaan at the Noel Coward Theatre London.
Our admin Niamh went along and below is her review. She also took a video at the stagedoor which can be seen at the bottom of the page. As the show is in previews, the review is reasonable and as it was written during the interval and immediately afterwards, it is a bit disjointed and over enthusiastic so bear with us!

Interval: so far the play,the acting and above all, the accents are superb. Daniel captures the movement of a person with a condition such as Billy's with ease. The ticks,the strained walking looks so realistic.

He had one or two minor slipups with the accent,but no single person from an area sounds exactly the same as another and this only occured on more passionate speech.

The costumes and scenery(which is on a rotated circle) are perfect for the era. Dan indeed has a bowlcut hairdo like i predicted!Overall the actors capture the black comedy of the piece,and are extremely talented.

Daniel, he seems,as always, to understand the innocent hope and optimism that defines Billy. Like it or not he's too good at playing orphans to stop!

Dan's performance hit overdrive in act 2! In particular his first scene and his second last are passionate and his movements as always are believable- what i mean is he is clearly in physical and emotional trauma.


Still kind of raging (annoyed in Irish slang) I didnt get to return to the stagedoor on the Monday night before it was over and get a good position. Wanted to tell Dan that his accent was good etc.
Posted by Admin, Niamh, Danaholics Anonymous at 10:47 PM