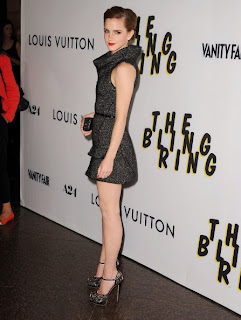 As we reported on our Facebook, Emma Watson attended the Los Angeles This is the End premiere a few days ago. She has been a busy lady and the day before yesterday attended the LA premiere of her other film The Bling Ring. An image of the actress at that premiere can be seen left, thanks to Snitchseeker.

In other Emma film news, the production company behind This is the End  have released some fotage of Emma, being interviewed on set and behind-the-scenes on the film. These can be seen below: