First Look at Helena Bonham-Carter in Taylor and Burton,Public Interview with Jason Isaacs in July 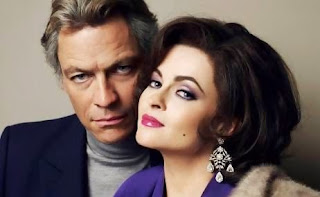 Helena Bonham-Carter, best known to Potterheads as Bellatrix Lestrange, has begun work on a biopic of Elizabeth Taylor and Mugglenet are reporting a first look at her in the role. An image of the actress in the role for the upcoming tv movie Burton and Taylor can be seen left. he film follows Taylor's life and relationship with actor Richard Burton, focusing mainly on the pair while they work as co-stars. This is not the first BBC biopic the actress has starred in, having previously portrayed famous children's author Enid Blyton.

In other deatheater actors, Jason Isaacs is reported to be signed up to attend a special concert next month.
According to Mugglenet, the Lucius Malfoy actor is to be interviewed at the Barbican Hall in London on 6th July as part of a movie music performance by the Birmingham Symphony Orchestra. Tickets can be purchased here for quite a heafty price of £30.
Posted by Admin, Niamh, Danaholics Anonymous at 10:41 AM