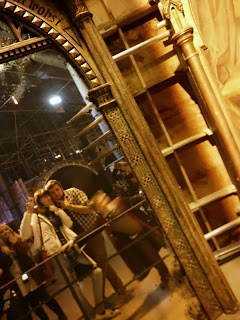 If you're visiting the Warner Bros Studio Tour this summer you're in for a treat. The harry potter set museum is to host a spell-featured event between 26th July and 2nd September according to Mugglenet. Some features include:


Visitors will discover first-hand how spells such as Wingardium Leviosa came to life on screen and how the wand movements that accompanied them were developed.

Knowledgeable staff members will be on hand to teach wand battle choreography, aided by an interactive experience created by choreography expert Paul Harris. Paul composed the battle scene between Dumbledore (Michael Gambon) and Voldemort (Ralph Fiennes) in Harry Potter and the Order of the Phoenix and is the world’s only Wand Combat choreographer.

Those exploring Diagon Alley will be able to take part in a special effects demonstration created by BAFTA-winning Special Effects Supervisor John Richardson. By pointing a wand, visitors will be able to cast a spell that will make the sign above Potage’s Cauldron Shop bang and flash as if by magic.


In other Potter news, the Playstation Wonderbook experience is to expand; with Potions! The original spellcasting game that is a collaboration between Sony and J.K. Rowling, is to gain a brother, a Potions book:


The new Harry Potter game, developed with Pottermore, will allow players to try their hand at potion-making under the guidance of Zygmunt Budge, a new character created by JK Rowling for the game.

There was a trailer, but it seems to have been taken down by our source :|
Source: Snitchseeker

UPDATE:
I found the video myself:

Posted by Admin, Niamh, Danaholics Anonymous at 11:02 AM