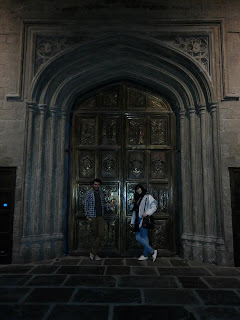 Warner Bros. Studio Tour London – The Making of Harry Potter was awarded the 2013 Thea Award for Outstanding Achievement for its "breakthrough innovation within the themed entertainment industry.

In other news surrounding the London attraction, animal actors will be on hand this May to add more magic to the wonderful studios:


From Saturday 25th May to Sunday 2nd June 2013, a selection of animals, trained by Head Animal Trainer Julie Tottman, will revisit the incredible sets they frequented when working on the films.

Visitors will be able to pose for a picture with one of the snowy owls who played Harry Potter’s letter-delivering owl Hedwig as she sits outside 4 Privet Drive or watch as she flies across the Studio Tour’s backlot. A selection of owls, including the one that portrayed Ron Weasley’s pet Pigwidgeon, will be showcased in the backlot throughout the week and will also feature outside the shop front set of Eeylops Owl Emporium in Diagon Alley.

One of the cats that played stealthy Mrs Norris and one of the ginger cats that played Hermione Granger’s bandy-legged feline Crookshanks will prowl the Gryffindor common room. Visitors will also be able to learn how rats and toads were trained behind-the-scenes as the animal actors, who played Neville Longbottom’s toad Trevor and Ron Weasley’s rat Scabbers, were.


Finally, Mugglenet are reporting an exclusive of plans to expand the Florida based Harry Potter Theme Park, The Wizarding World of Harry Potter. Their news can be read here.
Posted by Admin, Niamh, Danaholics Anonymous at 9:44 PM