The director of Kill Your Darlings, John Krokidas, has recently been discussing casting Daniel Radcliffe and the difficulties particularly relating to Dan's commitment to the Potter films: 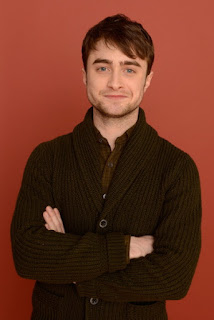 This is your first film - how did you get all these amazing actors, and how did the casting process go?
John Krokidas: Laura [Rosenthal, casting director] was a big help. Basically, when [producer] Christine Vachon of Killer Films came on four years ago, I made a list of all the young actors under 30 that I wanted to work with. And when I wrote down the name Daniel Radcliffe, I thought to myself, “Hmm, the role is … a dutiful son, whose only shown one color of themselves to the world. Who has so much more inside of him that, by the end of the movie, he’s a poet, he’s a rebel and he shows everyone that there’s so much more to him.” I had a feeling that Daniel could identify.

We sent him the script and, literally, he responded within a couple of weeks. I was sitting down across the table from him while he was doing Equus. They say meeting your actor is like a first date, and you know within five minutes. The hour meeting became six hours and we ended up sharing so many stories about ourselves, and there was trust between the two of us.

Just to give you an idea of what a great person he is, at the end of it he offered to audition. Who does that? Because he wanted to make sure that our chemistry was going to be strong enough to make it through this film’s short production period, and also that he had everything that I wanted the role to be.

So, there was one problem. His agent said he had just two movies left to do before he could do another one: The Deathly Hallows 1 and The Deathly Hallows 2. So he wouldn’t be available for two years. So I took my other first choice, Jesse Eisenberg, and we built a cast around him. But then, the financing came together … the financing fell apart … and then Jessie got The Social Network.

After it came out he called me and very poignantly said, “John, I think I’ve just played the most iconic Ivy League college student I can ever play – and I think I need to play grownups now.” So now I didn’t have a cast, I didn’t have financing. And then I remembered, two years had passed – and I had Daniel Radcliffe’s email.

And so I wrote him in the middle of the night and I said, “I hope you don’t think I’m stalking you. Do you remember this movie? Do you remember meeting me? If you’re still interested, I would love for you to come on board.” The next day he wrote me and said, excuse the language, “Abso-f***ing-lutely.”

Once we had Dan, you would think the movie could get made. But there are people with calculators who tell you what these actors are worth, and whether they can get a movie made. And at that point they said to me, “Daniel Radcliffe cannot open a movie without a wand in his hand.” So I said, “He’s playing Allen Ginsberg, so there’s somebody’s wand in his hand …” But, no.

Mugglenet have reviewed the film and it can be read here.

In other Dan news, Dan recently recorded a piece for the online show Bad Teeth entitled How to Be Daniel Radcliffe, which can now be viewed below: