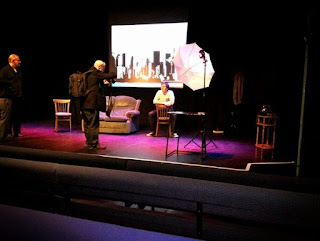 The opening night of James Phelps stage debut The Boy Who Was Woody Allen occured last night and Mugglenet was there to interview James and review the show. The show is playing at The Pleasance in Islington, London until 9th February inclusive.

James plays an 18 year old Catholic boy at a loss with what to do with his life and as a result, decides to become Woody Allen.


The full audio of the interview can be accessed here. James revealed that he and Oliver are to be in New York City to promote a SECRET special event at the Harry Potter: The Exhibition in Discovery Times Square.


A review of the play can be read here while snippits appear below:


This production offers an original and alternative story of the iconic filmmaker, although one that is not entirely convincing.

James Phelps, of Potter fame, makes a convincing stage debut maintaining momentum, and the accent, through long sections of speech.


UPDATED:
This Week London recently had a Q&A with the former Weasley about the show:

TW: How did you get involved with the project? Who else is involved?

JP: I have always wanted to do theatre, and a few weeks ago I was sent the script and asked if I would be interested. I loved the script and met with Adam Morley (director) and Geoff Morrow (Writer) and we hit it off right away. Three weeks later and it’s nearly opening night.

TW: Can you tell us an amusing Harry Potter anecdote? Or a dull one, we’re not fussy.
JP: We were in Orlando for the opening of the Wizarding World of HP at universal studios, and one evening Oliver (my brother) and Rupert Grint and I went out and ended up in a place called Rising Star (very cool karaoke place). We ended up doing a song and then found out the audience was full of Harry Potter fan-site people… perhaps unsurprisingly, we seemed to go down pretty well…!

The full interview can be read here and tickets are still available for tonight, Friday and Saturday here.