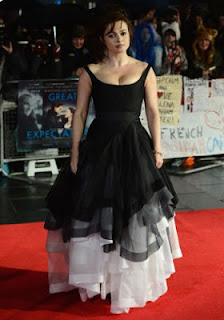 Helena Bonham-Carter, Jessie Cave and Ralph Fiennes attended the Great Expectations premiere as part of the British Film Institute festival last night.Getty posted many images of the attendees which included Potter costars such as Bonnie Wright and Robbie Coltrane. All images will be in our galleries from here. One image of Helena is left.
Ralph said of Dickens' characters:

"These Dickens characters, they're so rich, and they're always a great challenge to actors I think and they're such strong, definitive, they have a high definition about them, they leave a lasting mark, whoever plays them I think, they're so well constructed by Dickens that any actor - it's a gift to play them, to get the chance to interpret them."

The Telegraph posted an interview with Helena and Ralph which can now be seen below:


The film was directed by Potter director alumni Mike Newell (who directed Goblet of Fire) and will be release in UK cinemas November 30th.

Helena Bonham Carter was also to receive a fellowship as we tweeted previously . An image of the lady herself with her award is here.
Finally, both Helena and Bonnie Wright attended a special screening of The Tim Walker StoryTeller earlier in the week images are here and here.
Posted by Admin, Niamh, Danaholics Anonymous at 1:47 PM