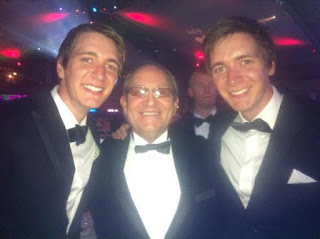 The Potter cast were out in force last night in aid of charity. James and Oliver Phelps finally attended the much publicised charity ball  in Birmingham for the Harry Moseley charity. A picture posted by Mr Tom Ross  of himself and the twins and reposted by the boys can be seen left and more are in  our galleries here. Oliver reported that a whopping £100,000 was raised in honor of the brave Harry. 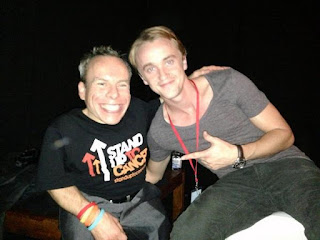 Tom Felton and Warwick Davis also partook in a charity event in London last night. Tom took part in a charity edition the popular Channel 4 live show the Million Pound Drop Live as part of the event Stand Up to Cancer, popularised by success in America. Feltbeats were tweeting away through the event last night and posted some images  of Tom in action while Snitchseeker posted images of both Tom and Warwick and a video. Tom himself tweeted the lovely image of the pair right.
Snitchseeker posted A VIDEO, but Stand Up To Cancer's youtube posted a better quality video which is below: