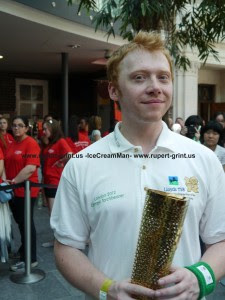 A few weeks ago now, Rupert Grint was flocked by fans and Olympic enthusiasts alike as he carried the Olympic torch through the streets of London. As this news is weeks old, I will post some photos on the facebook and some videos from Rupert Grint US and move on to more recent stories for you all!


Rupert also participated in a discussion on the phenomenon of Harry Potter with producer David Heyman also in attendance. The talk entitled Harry Potter: The Magic behind a British-made global phenomenon occurred at the Creative Content Summit on and a video as posted by RG.US can be seen below;


They also posted a video from Digital Spy in which Rupert and Tom Felton reveal what their olympic sport would be;


JK Rowling also took part in olympic festivities, reading from Peter Pan at the opening ceremony while a large Voldemort puppet attacked London as part of the children's literature theme.Snitchseeker posted a video, which can now be seen here.
Kenneth Brannagh was also in attendance.
Posted by Admin, Niamh, Danaholics Anonymous at 7:54 PM