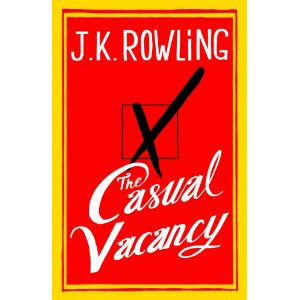 Exciting news Rowling fans! Joanne is to do her first open public events for the release of her upcoming adult novel The Casual Vacancy.
Mugglenet have revealed that except on the West Coast of America, there is no midnight launch (for more see here) but some events will occur in Britain:

J.K. Rowling will be attending The Times Cheltenham Literature Festival where she will be discussing her highly anticipated new novel for adults The Casual Vacancy. This event is scheduled to take place on October 6th at 6:30pm at the Centaur, Cheltenham Racecourse. Tickets for this event will be sold to Cheltenham Festival Members beginning on August 13th and go on sale to the public on August 20th.

According to Snitchseeker, JK will also do a reading on September 27th in London's South Bank centre:

J.K. Rowling launches 'The Casual Vacancy', her first novel for adults, in this very special event to mark publication.

J.K. Rowling reads from the book and is then in conversation with Mark Lawson, before taking questions from the audience. She will be signing copies of 'The Casual Vacancy' after the event, limited to one copy per audience member.

If there are any tickets left, they can be bought here.
Posted by Admin, Niamh, Danaholics Anonymous at 8:32 PM