Snitchseeker are reporting that Dan Radcliffe had previously recorded a 60-second Public Service Announcement which was shortened upon release for the most deserving charity, The Trevor Project, which aims to prevent suicide in LGBT teens, but now the full version has been released
Check out the video below; 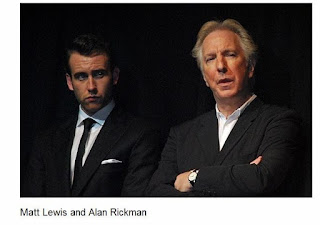 In other cast news, Wasteland's official twitter has announced:

Great news Wasteland will be hitting the states.

This is great news for Matthew Lewis fans in America!
Matt has also spoken to RL World about Leeds Rhinos and more! check out their twitter for more.

Finally, Alan Rickman is set to play and American president: Ronald Regan. Mugglenet reported last week that a new film about America's 40th president is being made and Alan is cast in the lead role. The film is entitled the Butler and Mugglenet have said the following;

Alan Rickman is just the latest of the big-name stars to join the cast that includes Oprah Winfrey, Forest Whitaker, Jane Fonda, Liam Neeson, and John Cusack. Matthew McConaughey, Cuba Gooding Jr., and Terrence Howard have also been mentioned for the film.

The Butler will present the details of the life of Eugene Allen (Forest Whitaker), a White House servant who worked for every president from Harry Truman to Reagan.

The film is based on a Washington Post article written about Allen.