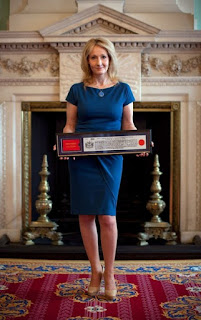 WE revealed early this month that beloved Potter author Joanne Kathleen Rowling was to receive a great honour: that of the Freedom of London. This she received May 8th at the Manor House London from Leaky have now posted some nice images of the event, one of which is left while more can be found in their galleries here.

When Jo had received her award she said:

I am prouder than I can say to be given the freedom of the City, which, on top of all the known benefits – and few people realise this – entitles me to a free pint in the Leaky Cauldron and a ten galleon voucher to spend in Diagon Alley.