New image/interview of Emma Watson on the set of Bling Ring,Padma Patil Actress and Chris Rankin to attend Ascendio 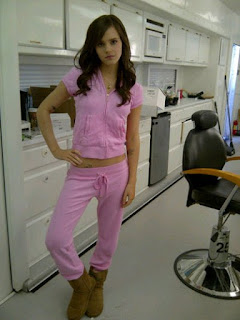 Leaky re-posted a new image of Emma Watson as Bling Ring alter-ego Nicki, originally posted by Emma herself.This can now be seen left. They also posted some new set images which can be viewed right here and here.
Snitchseeker also posted a new interview, from the upcoming issue of UK Glamour magazine which can be read in their scans here and here. A few quotes are below;

Emma Watson: "I love French pharmacies. I'm obsessed - I could spend hours. They take a very medical, pharmaceutical approach to the face," she said in the latest issue of UK magazine Glamour.

I love the French - less is more look - there's something very classy about it. It's so sad when people hide themselves behind too much make-up."

"I love having facials. I think it makes more of a difference to how I feel than a full-body massage does. You feel so fresh and new. And eyedrops… genius! The anti-redness ones are so good," she smiled.

"This sounds so ridiculous, but if you analyze what I've done with my hair over the years, it always matches my moods. Cutting off all my hair was all about getting rid of Harry Potter, and going dark was about mourning the end of Potter," she explained.

Mugglenet are reporting today that Ascendio has received some Potter stars to it's atendees list; Chris Rankin and Afshan Azad.
Afshan, the actress who has played Padma Patil since the 2005 film Goblet of Fire and is a compulsive twitterer, tweeted;

SOO glad its been announced! yes me and @chrisrankin will be attending this years Ascendio 2012 in Orlando FL... Make sure you're there!! :)

Chris Rankin, who portrays Percy Weasley will also be in attendance at the Potter conference which takes place in Orlando,Florida this year,right near the Wizarding World of Harry Potter theme park! Two birds,one stone,right?
Further details can be found here.
Posted by Admin, Niamh, Danaholics Anonymous at 10:37 PM