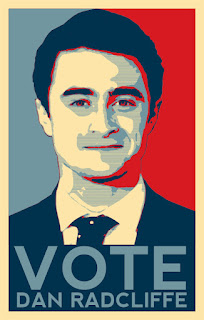 DR.COM have posted a nice little reminder to vote for Dan Radcliffe in Entertainment Weekly's Poll of favourite Saturday Night Live presenters. You can do so here. They produced the awesome poster, pictured left, to replicate many that were released before President Barack Obama's election.

We previously informed you that Harry Potter and it's cast were nominated for six MTV MOVIE AWARDS. Magical Menagerie are now reminding us to use our free votes (yes,you can vote as often as you so wish once you refresh the page) and vote for Potter! You can look at the categories Potter and it's cast are in and all the other ones too here.
Posted by Admin, Niamh, Danaholics Anonymous at 10:19 PM