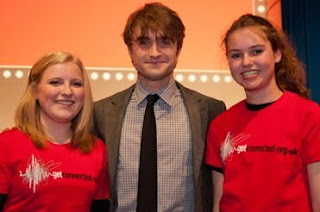 Snitchseeker are reporting that Daniel Radcliffe has shown his charitable side once again by attending and co-hosting the Get Connected fundraiser and helping to raise £20,000 in the meantime!

Left is a picture of Dan at the event with two members of the Teen Rock Choir who also appeared at the auction. The charity is a London based free hot-line for young people under 25.

In other, and very exciting news, Pottermore is top open to the public next month! After a wait of 5 months past the original planned opening of October last year this comes as a great surprise to Potterheads the world over that missed out on the 1 million beta user entry. Pottermore released the statement on their blog here a couple of days ago.
Posted by Admin, Niamh, Danaholics Anonymous at 1:48 PM