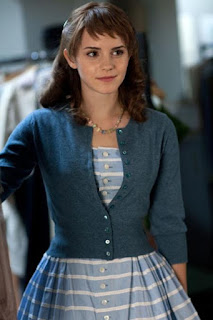 Snitchseeker posted this story an hour or so ago, but my Ed Sheeren obsessive pal Michael Cox posted me a link to the video 3 hours ago, so this is the one I shall use. This can be now viewed below;

In other news, Magical Menagerie reported that some Harry Potter cast took part in a scetch called “The One With a Hogwarts Job Centre” on Matt Edmondson's show. MM included a link to the broadcast, which they say you should listen to the segement begining at 23:06. Go here to listen to Matt Lewis, The phelps, Bonnie Wright and Rupert Grint.

Snitchseeker posted some nice promotional stuff of Emma's post Hogwarts career late last night after GMT me hit the sack, so here is a clip of Emma in Perks of Being a Wallflower, while one of the new My Week With Marilyn promos is todays blog post picture.The rest can be found on our facebook.
The video,which i must note only includes a short feature as it is mainly about Emma's Perks co-star;