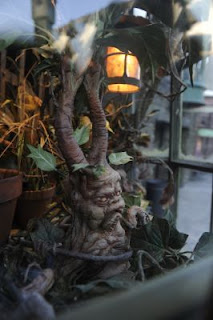 Warwick himself posted the link to this trailer (which followed Don't Mind the Buzzcocks the other night), it being on his new BBC SHOW Life's Too Short. The trailer, which i missed cause of differing BBC NI schedules, can be now seen below;


In other (rather exciting) news, various DEATHLY HALLOWS PART 2 cast members have been shortlisted for The People's Choice Awards. Snitchseeker posted the news, and further info about who was nominated and how you can vote can be found here. DANIEL WAS NOMINATED!!
GO HERE FOR A FULL LIST OF NOMINEES:

MAGICAL MENAGERIE also broke the news regarding UNTOLD STORY OF THE WIZARDING WORLD OF HARRY POTTER..this time concerning plants that live in the theme park in Florida..todays post picture is the one included in the news.


FINNNNALLLY Page To Screen is also now available for pre-order here according to mugglenet who also announced PRIZES to win WITH PRE-ORDER!For full details head here. Theyre also offering the prize of one!They also mention here that copies on dvd of The Jk Rowling story can be won..check it out!!
Posted by Admin, Niamh, Danaholics Anonymous at 11:30 PM