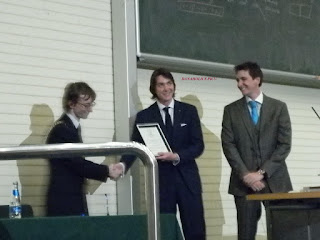 I just this minute boarded the bus back into Dublin,so will give you all the full lowdown on James and Oliver Phelps receiving honorary membership to UCD Law Society in Dublin this evening when i get off the moving bus!
UPDATE...much later!Let's just say, It was Arthur's Day and I'm Irish!

I enter the room around 7 (I love being a bit of a journalist, got in after only being there 15 minutes and got free law soc membership..nice!), all is set up, water bell and all. The ambiance is of excitement, their image from Deathly Hallows Part 2 promotional image is on screen. After asking the girl beside me, I find out people have queued since 5pm, long for Ireland as we are laid-back; NO DRAMA, no pushing which is a first for me at Potter events.
Its half 7, people are still filling in excitedly, the place is so full, people have started sitting on the steps and even on the floor! I spot a Gryffindor tie, a few girls with 'Weasley is our King' t-shirts, but for the main part these are everyday UCD students.
Shortly after half 7,the president of Law Soc arrives showing a few nostalgic pictures, introduces his note-taker,who gives a wonderful Potter-themed speech and he then introduces the boys.

Oliver speaks first, on James' request,thanks us all for being there and lovingly refers to his time on Potter. James does the same and then the floor is opened for questions. Here are some of the best;
THE NORMAL:

Q:If you could play any other character in the series who would it be?
JAMES: George. (laughter all round).
Oliver: A Voldemort-type character. ..(more laughter).. or a Death-eater or something..

Q:What is your honest opinion of Twilight?
J: Haven't seen it...
O: We worked with Rob..glad it's done so well..

Q: Ever laughed on set?
[USUAL ANSWER...RUPERT!!! ]
J: It was Order of the Phoenix...the bit where The Room of Requirement is discovered..and the camera pans over the cast...Rupert goes: (covers mouth and makes suppressed laughter sound) and then i went (suppressed laughter).

Q:Are you on Pottermore?
O: I tried to register...(laughter)..will try again.

Q: What house do you think you'd be put in if you got in?
James: there's this sorting hat..Burbank Studios..It put me in Gryffindor..
Oliver: (downcast) Hufflepuff...

Q:Do you miss Harry Potter filming?
James: after ten years...it's nice to do something new...we do miss it,it's like you..when in university..you make lasting friends..we still hang out with the guys..Yes and No.

Q:Do you plan on continuing acting?
James:well, we are both in talks at the minute for separate projects. (communal awwww!) we were afraid we'd kill each other... and we have different interests..

Danaholics Q:OUR READER LAURA ASKED; Oliver, whats the progress with Latin Quarter?
O: Haven't started yet. It keeps getting pushed back and pushed back...hope we start on that soon.

Q:How'd you feel when you knew you were the twin that was gonna die?
J: Let me set the scene...I was in Japan..I'm not being melodramatic,I was! On the fast train..and the ticket guy was coming up to me..and I read the paragraph..was like my best mate had died..and he was talking to me in Japanese..tried to explain I had died!

Q:Take anything from set?
J: Nothing..legally..I don't know how it got there, but I do have a bag from Weasley'S Wizard Wheezes... (Laughter)

Q:If you could take any object from the wizarding world? what would it be?
O: Portkey...waiting in airports queues is horrible..
J: Hermione's Handbag...(LAUGHTER) not the handbag..just that you can shove as much stuff as you want in..

Q:What opening line should we use if we see you in the pub later?
Oliver: Can I buy you a drink...I dunno, James would know better.. (moves back to let James take the fore)

Q: Can you call Rupert?
James: He's in America at the moment..I can't.

Q:If you had Polyjuice Potion, who would you change into for the day?
James: Like I havent heard that one before...Guess Slash...cause he's a wicked guitarist.
O: Luke Donald. (followed by quiet) He's a golfer.

Q: How long do you know each other?
J: How long did it take you to come up with that one. (laughter and massive clapping)
O: Quite a while.

Q: How has it changed your lives?
J: we get to travel a lot..they let us,Tom and some friends into the Louvre after hours..it was like us (makes thumbs up pose) with the Mona Lisa!

Q: Who is the mechanical head outside Weasley's Wizard Wheezes based on?
O: James...

Later, James and Oliver happily signed autographs after they received their honorary Law Society membership.
*Disclaimer; Please note that in places mild paraphrasing was necessary.*
I will try to get the audio up, and all the pics (50+ of them) are on the Facebook.
Posted by Admin, Niamh, Danaholics Anonymous at 9:05 PM