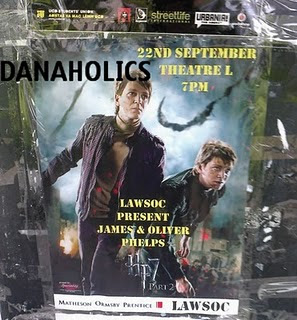 As I previously mentioned, Danaholics have the scoop on a possibly 2 hour long appearance by James and Oliver Phelps, better known as Fred and George Weasley, in Dublin this coming Thursday.
I have since got confirmation from the PRO of UCD Law Society, the host of the event, and have today conducted an interview, via email, with the very same, gaining all the necessary details!!


DANAHOLICS ANONYMOUS: Why did LawSoc decide to hold this event/how was the idea conceived?
Stephen Devine, PRO of UCD LAWSOC: Each year the Law Society of UCD invites guests whom we feel have made a special contribution in their chosen field to address our members and then receive an Honorary Life Membership of the Society. These areas include but are not limited to Politics, Sport, Film, Music and the Arts in general. The current committee felt that James and Oliver we deserving of an award this year.

DA: How does it relate to the Law society?
Stephen: The Law Society of UCD has a proud history of bringing the biggest names from every walk of life to address the Society. Guests in the past have included Jeremy Irons, Bill Bailey, Jesse Jackson, Noam Chomsky and John C. McGinley.

Could you possibly give me a short description of the event?

The event will start with the private business of the society such as corresponds and records after which James and Oliver will be introduced. They will then spend some time talking about their experiences as part of the Harry Potter franchise and their plans for the future. After which it is customary that they would accept some questions from the audience. At the end of the event they will be presented with Honorary Life Memberships by the current Auditor of the Society, Mr Francis McNamara.

DA: How will questions be submitted and who chooses which will be answered?
Stephen: The guests themselves normally pick out people in the crowd who have raised their hands to ask a question. It is anticipated this will be what will happen with this event.

DA: Will it be open to people outside UCD?
Stephen: Access to the event will be limited to UCD Law Society members. Membership is open to all students of UCD and costs 2 euro. There will be an opportunity to join the society on the night.

DA: And finally, how can one get tickets and if there is a cover charge how much is it?
Stephen: This is not a ticketed event and is open to all members of the society on a first come first serve basis. There is no cover charge.

I am currently in talks to cover the event on Thursday and will be taking questions submitted on twitter and facebook. The best will be selected and I will do my darnest to get it asked!
Posted by Admin, Niamh, Danaholics Anonymous at 6:53 PM