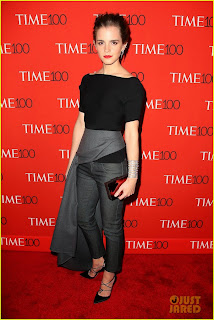 Emma did a groudbreaking feature for ELLE back in December, speaking about Feminism as part of the ongoing #HeforShe campaign. The cover is now up for a Professional Photographers Association award and you can vote here!

In other achievements concerning Emma, she made it into the coveted Time 100, meaning she is one of the most influencial people in the world, well officially, because we already knew that! She was honoured at the event and an image of just another of her daring and stunning outfits left.

The men of AskMen also found themselves inspired by Em this year and named her most outstanding woman of the year for her work for women and men alike with gender equality campaign #HeforShe.

"This year’s list is not only a reflection of a shift in the media, but also a shift in modern male thinking,” said AskMen publisher James Bassil. “We wanted to steer away from ‘hot’ lists and highlight women who have demonstrated a sheer influence in their industry."


a new shot of @EmWatson from her upcoming movie COLONIA, out this fall! Who's excited to see it? pic.twitter.com/tlpAD5xOwL
— DanaholicsAnonymous (@DanaholicsAnony) May 3, 2015


In future projects, the book Queen of the Tearling has been released in paperback and can now be purchased online @HarperCollins