Daniel Radcliffe confirmed for Now You See Me 2, Kill Your Darlings on Netflix, Josh Horowitz image, rapping with Chris Pratt and other interviews for Horns


In the confirmation of news we could probably already rely on, Daniel Radcliffe has been confirmed to star in the Now You See Me sequel, though we are as of yet unaware in what he will be doing in the film except that he will be Michael Caine's son.

In other Dan stuff, Horns promo in the UK and America hit a high recently with many new interviews emerging. The ones we heard about (I'm sure there are many more) are now below.

First of all lets start of with one in which co-star Juno Temple participated in as its nice to see Dan bounce off another person. This was a 'Would I ever' type of question and answer session with Buzzfeed. Check out a sample below while the full interview can be accessed by clicking the word "session" above:

Would you make up an excuse to cancel on friends but then stay home and watch TV?
DR: Yeah!
JT: Yeah!
DR: John Mulaney has a great line about that. He says, “Canceling plans is second only to heroine in terms of instant relief.” It really is! If you’ve got a really busy evening and you go, Actually no I’m going to stay home and do nothing, you will never be happier than you are at that moment.

What would you binge-watch if you canceled plans?
DR: Well recently I sat down to watch one episode of that new Netflix show BoJack Horseman, and just watched the whole thing in, like, two days.
JT: When I got back from England, I put on the telly to that show Naked and Afraid. I watched like eight episodes! It’s such a weird show. This one guy made it so uncomfortable! He came on and he was obviously feeling really good about being naked, so he went up to this naked girl and said, “I’m going to make this as awkward as possible.” *Acts out shimmy movements* And she just went, “Oh yeah.” I did binge-watch that [Naked and Afraid], but that wouldn’t be my choice, I don’t think.
DR: Ancient Aliens! I don’t want to sound like I’m really highbrow all the time because I’m definitely not. 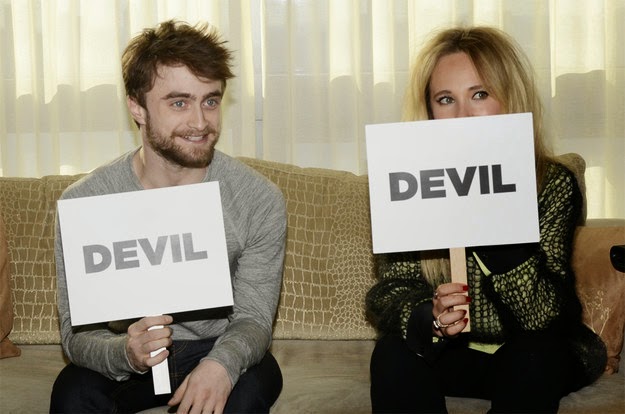 In an interview with Yahoo, Dan recalled what people now refer to as his "winning of the internet", when he rapped live on Jimmy Fallon. Yahoo mentioned a similar feat Chris Pratt undertook and he admits that he would like to collaborate but that he isn't picturing a "side career":

I would love to do a rap song with Chris Pratt," Radcliffe tells us laughing. "We should totally make that happen."

It would likely have to be a cover, though. The erstwhile Harry Potter star has no intention of moonlighting as a musician.
"No, I’m making that very clear at the moment, I’m not [launching a side career]," he says. "Just covers."

In verbal interviews, Dan took part in the most recent Empire Podcast:


Time also sat down with Daniel and the interview can be read here. I love how he handles Potter references from interviewers:

So you’re not controlling them with Parseltongue?
No, no. It’s funny — I don’t think about any of this stuff that can be equated to Potter, like the talking to snakes. Being so close to Potter for so long, I can’t even see references to it in other places.

Dan did an interview with Josh Horrowitz for MTV, which we are still sourcing, but for now enjoy the image above!

﻿Finally, i would like to share my great discovery - Kill Your Darlings is on the UK and Irish Netflix!
Posted by Admin, Niamh, Danaholics Anonymous at 6:31 PM