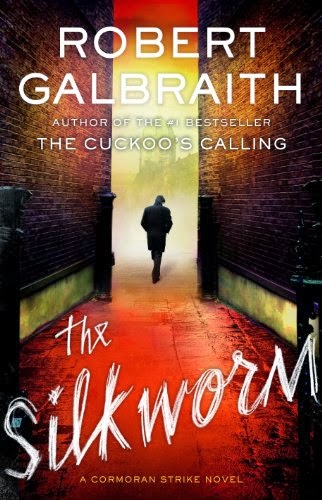 As we tweeted previously, Robert Galbraith's (*ahem Rowling ahem*) next novel, continuing the Comoron Strike saga, will be called The Silkworm and will be released on June 19th in the UK.
In promotion of this, Jo Rowling will attend "a panel discussion at the Theakston Old Peculier Crime Writing Festival in Harrogate on 18th July at 7:30pm."

Tickets:
Tickets for all Special Guest events will be available to purchase from 10am on Monday 17th March 2014. Given the anticipated demand, Weekend Rover tickets and Individual Event Tickets to the Rowling/Galbraith event will not be made available online, but can be purchased by phone on 01423 562303 or in person from the Harrogate International Festivals Office at 32 Cheltenham Parade, Harrogate HG1 1DB from the above on sale date/time.

According to reports, the author has been working on a third installment of this series since as early as last year but "there [is] no plan of a seven book installment, akin to the Harry Potter saga."
There is also word of POSSIBLE tv adaptations, though nothing is CONFIRMED.

In confirmed Rowling adaptations, we finally have some news on the Casual Vacancy television drama. The last we heard about it was December 2012 here!

Sarah Phelps, who wrote the scripts for BBC's Great Expectations and EastEnders, has been confirmed to haven written the screenplay for the upcoming miniseries for The Casual Vacancy...production will begin sometime later this year, and that no casting information has been revealed yet.

Finally on the Rowling newsfront, the author published some new Pottermore info in celebration of Scotland's Rugby Team ahead of the 6 nations.