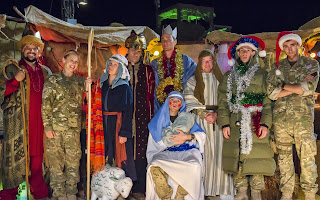 We've had news that Matthew Lewis' featured episode of BBC's Bluestone 42, the Christmas special, will air 23rd December on BBC 3 at 10pm. An image is left and for those of you who do not get the channel, we will post any screencaps or videos as we get them.

It’s Christmas Eve and the team are joined by Nick’s new number two, Corporal Gordon House, aka Towerblock, on his first tour of duty.
Captain Nick Medhurst is tasked with getting him up to speed, but as Towerblock finished top of his class on the High Threat Course, he thinks he knows it all. He soon finds out things are different in the field, even on Christmas Day. The Taliban don’t stop for Christmas and it’s up to Nick to pull the team together.

In other cast news, Evanna Lynch has joined a new film, which has already begun shooting in Brooklyn, New York. The film, entitled Dynamite: A Cautionary Tale, is a crime thriller and Evanna is rumoured (it has been listed on IMDB.COM at this stage) to be playing the wife of Ian Harding's character Max Bornstein. The summary from the above website is as follows: