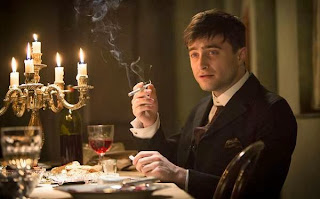 With only 3 days until the 2nd season of A Young Doctor's Notebook airs on Sky Arts in the UK, some new stills from the season have been released online. Check one out left while the rest join the few bits from Season 2 in our gallery.
Dan also spoke to The Telegraph about returning to the series and his characters development:

'The script would say, “Dan sings in Italian,” or, “Dan breaks out into a funny dance.” I don’t speak Italian, and the only funny dance I know I plagiarised from How To Succeed. I think the writers took great pleasure in seeing what Jon and I would do. But I have a lot of trust in them. So if they have me dancing in a clown costume, I know it will be for very good reasons.’

'The characters are much more richly developed,’ Radcliffe says. 'The young doctor is on a steep moral decline, but the key is to keep the humour. We pay appropriate homage to the moments where you need to be sufficiently dark or sad. But the psychology and behaviour of an addict is pretty laughable, and there is a lot to be made fun of in that insane logic.’


In other Doctor's Notebook news, a friend led me to ponder whether U.S. fans of Dan could watch the first season yet as I'd heard about Ovation's screening long ago and hadn't heard anything yet. Therefore I was led to researching the DVD release. I found out the following:

You can watch from Amazon's Instant Video Service here for $1.99 an episode (a bargin at $8 for the season, although I pressume it's a streaming one watch thing.

You can also click to be notified when pre-order on the DVD becomes available here.

In other Dan news, the official Facebook of Kill Your Darlings is running a competition offering fans the chance to win tickets to the film prior to it's UK release on 6th December. For the non-artistic types who could not get involved in the cut-up exhibition competition, there is a separate competition to win tickets for a  screening to be held the same date as the exhibit, next Thursday 21st November:

The exhibition will be projected at key locations around London being seen by thousands of people.

If YOU spot a projection, take a picture and tweet it using #KYDcutUP for a chance to win tickets to an exclusive preview screening of Kill Your Darlings. 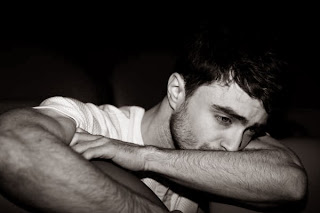 Finally, as we posted on our Facebook, Daniel posed and spoke to Fiasco magazine and a few quotes from the interview and one additional image from the photoshoot (which we had seen on a friend's twitter previously and is now right) are now available online. The quote is below:

'I would love to do an action film but I need to find the Simon Pegg role. I kind of fancy playing nerdy computer guy in something.

'I'm not an action star! I would do one 'cos I think they're fun but they're not the kind of movies I love.'

Her said: 'I needed to do independent films, absolutely. The thing I needed to do was work on some great scripts and they are few and far between coming out of the big studios.

'You don't get many where this is a 'for sure blockbuster' and also a really excellent script.

He added: 'The thing most important coming out of Potter was doing work that excited me and they all happened to be indie films.'

Posted by Admin, Niamh, Danaholics Anonymous at 12:13 AM