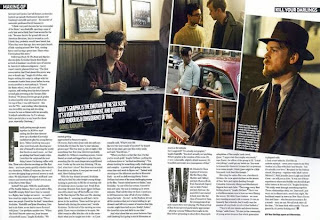 In a little disappointing news, UK viewers (aside from those attending the London Film Festival soon) will have to wait a little longer to see Dan Radcliffe's highly anticipated next movie Kill Your Darlings. The new UK release date is December 6th. Yet where there is waiting there is promotional stuff so I can tell you that Total Film have done a behind-the-scenes-making-of type feature on the movie in their most recent issue. The scan provided is a little small (left), but we will look into it further for you!
Related to this, Dan spoke about the "tender" gay sex scenes in the movie to the magazine which you can read here.

In other Dan news, he talked about his other projects that he made last year and also  from the set of his filming for the first season of A Young Doctor's Notebook. Check out the videos below:

Finally, in some slightly older news that escaped me attention, as can happen when things are busy, Dan has previously been speaking about his difficulty breaking from Potter and also his upcoming film Frankenstein.

Of the script for the retelling of the Shelley tale he said:

"In terms of Igor, I think we're going to see a character who is given a lot more depth than we've seen him allowed in any other incarnations of the story...It's a wild script. It constantly surprises you and it's great, great fun as well."

He also spoke about his joy at working with James McAvoy in the future shoot and how their characters relate:

"The relationship between Igor and Victor is one of two young men at the absolute forefront of the technology of their day. Plus it's a story about them pushing each other further, eventually having to make decisions about their relationship and their morality. I'm really excited about it and very excited to be working with James McAvoy as well.

Finally, if you can be in Los Angeles on October 3rd this is your LUCKY DAY:


Mike Sington, Director of Operations at Universal Studios Hollywood, announced on his Twitter page that actor Daniel Radcliffe will be at the park this coming Thursday, October 3.

Not much info on this meet and greet timed at 4.30pm, but we'll keep you informed!
Posted by Admin, Niamh, Danaholics Anonymous at 10:30 PM

iParrot Post is a global read and reporting news platform that enable users to post their account of events witnessed, worthy local and International news. iParrot Post is a breaking news portal.iParrot Post exists to provide independent news and information to the masses, comprised of news feeds from around the world. We enable our users and subscribers to submit local News that they see as important. It is also a portal to allow users and subscribers to comment and contribute to the News events of the day. Worldwide News UK | English UK News | Local UK News | UK Political News | English British Sports News | Business UK News | Breaking UK News | Technology UK News |