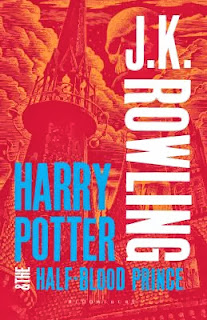 Magical Menagerie are reporting that that Bloomsbury, the UK Potter publisher, have revealed the latest cover for Harry Potter and the Half-Blood Prince. This can be seen left:

Over the past few months [Bloomsbury] have been re-releasing the UK Adult books with these new sketched covers by Andrew Davidson.

The first three books were available 18th July 2013. The next two have been be available since 15th August 2013 and the final two will be released on 26th September 2013. A boxed set containing all seven jackets will be available in October 2013.

In other Potter news,  Snitchseeker have found more images of the construction site that is to be Diagon Alley at the Wizarding World of Harry Potter theme park in Orlando Florida. All you can see so far is the scaffolding back of the shops and some Hogwarts Express cars, but if you want to look anyway, you can see the images here.

Another Potter story on Snitchseeker right now is an early cover option for Chamber of Secrets for the recent US re-release. Check a rather blurred picture of it out here.


In other news, The Harry Potter exhibition which is currently held up in Tokyo, Japan has had it's stay there extended to September:

Due to popular demand from fans, Mori Arts Center Gallery, Roppongi Hills is pleased to announce that Harry Potter: The Exhibition will extend its Japanese run by two additional weeks. The exhibition will remain open through Sunday, 29 September 2013.

The exhibition has already been experienced by more than two-million visitors worldwide and the extended run in Tokyo will give fans another chance to step inside Harry Potter’s world and experience it before the exhibition moves to its next location. Since its debut on June 22, Harry Potter: The Exhibition at Mori Arts Center Gallery has already seen more than 250,000 Harry Potter fans come through its doors.


Finally, The New England School of Communications is set to make a live-action adaption of The Tale of the Three Brothers, with permission of Warner Bros:


Casting is underway in the town of Bangor, Maine, for a child and an elderly man to play a grandfather, as well as several adult male and female characters. More information on the castings can be found here.