With this renewed Rowling writing, with the beginning of perhaps a new series for our favourite author, it is still wonderful to see the Potter life living on, if you'll excuse my bad wording.

The next installment of the Wonderbook for Playstation series, Book of Potions, is to be out by the end of the year, reports Snitchseeker. Included in the report is the below demo for Shrinking Solution: 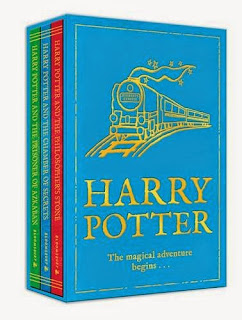 In other Potter merchandise, the re-release of the Potter books by Bloomsbury have had an update. The first three books are to be released in a boxset entitled 'The magical adventure begins'  in the UK October 10th. If you're interested, Amazon have it for pre-order here.

If you're in London on August 7th, with or without a LeakyCon ticket, you'll be interested in this special Leavesden event:

You can now be part of a special event at the WB Leavesden Studio Tour on Wednesday, August 7. This event will be just for our LeakyCon and Leaky Cauldron audience: those who will get the most out of touring the lavish Harry Potter sets together will be able to do just that.

Stroll the Great Hall, ogle the hundreds of props, find the real Leaky Cauldron (no, really, there's a giant cracked cauldron just sitting there as bait for all of us), take pictures on 4 Privet Drive or in front of the Knight Bus, walk around a stunning Hogwarts model, view the film concept art, tour the creature studios - the WB tour is a unique and fascinating look into every part of the making of the Harry Potter movies. And just for this event, you can make that visit with your favorite Harry Potter friends, whether they are in town for LeakyCon or not.

Each ticket comes with bus (coach) travel to and from Watford station and the studio, as well as a free butterbeer in a special souvenir cup. It starts at 4:30 p.m. on August 7 and go through 6:30 (though you are free to roam the halls until closing time at 10pm)! And as this is associated with LeakyCon, you never know what special guests or other surprises await!

To book, head here and chose Leavesden Tour only. Let us know if you head along!

Finally, Warner Bros Harry Potter Wish List has announced Dumbledore's Army Steepstakes, which you can enter by gathering their friends together to create their very own Dumbledore’s Army. With prizes such as Noble Collection wands, US fans over the age of 13 can enter here.